As an Amazon Associate we earn from qualifying purchases.

Since the Honda Motor Corporation introduced the world to inverter generators in 1999, the company has been a leading force in backup generator sales. This is largely due to the development of the Honda EU2000i Inverter Generator, Honda’s flagship product in the generator market. Since its launch two decades ago, the EU2000i has remained one of the top-ranking backup generators in the world. Even as technologies continued to advance and other brands began to introduce their own inverter generators, the Honda generator managed to remain competitive with only minor changes to its specs. It wasn’t until 2018 that the EU2000i was discontinued by Honda in favor of their newer model: the EU2200i generator.

The likely reason is that the company wanted a newer product to remain competitive in the market. As good as the EU2000I was, it had reached nearly 20 years old. Competitor generators hadn’t stopped advancing in that time, and it wouldn’t be long before something managed to outshine Honda’s older unit. With the development of the EU2200i, which has most of the same features as its predecessor as well as a few improvements, Honda can remain a leader of the backup-generator pack for several years to come. But the existence of a successor doesn’t mean the EU2000i has nothing left to give. The EU2000I continues to be a top seller, speaking to its continued quality. 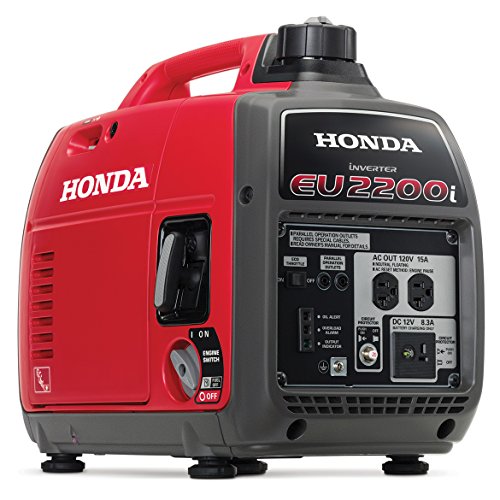 Super Quiet Operation: it is so quiet you forget you’re using a portable generator. The EU2200i runs at 53 to 59 dBA sound levels which is less than a normal conversation. This makes it ideal for camping, supplemental RV power and any other activity that requires unobtrusive power supply.

Lightweight And Compact: the EU2200i is designed with advanced inverter technology to be incredibly light and portable. It weighs a slight 46 pounds and features a convenient carrying handle. It's small enough to fit in the family car for a trip to the countryside.

Fuel Efficient: the EU2200i runs for up to 8.1 hrs on a single tank. Honda introduced an Eco Throttle system which adjusts engine speed to align with the load saving a whole lot of gas. This makes it ideal for use overnight.

Advanced Inverter Technology: Honda's inverter technology enables the unit to deliver clean, stable power devoid of harmful fluctuations. This means that you can use it to power computers, laptop and cell phone chargers and other sensitive electronic devices.

Parallel Capability: found yourself in a situation where 2,200 watts is not enough? The EU2200i allows you to connect a second EU2200i for doubled power output. This is achieved with an optional cable which you can easily connect.

The Honda EU2200i 2200-Watt super quiet reliable portable inverter generator is compact and lightweight. This model is loaded with advanced features that produce smooth, clean power for your appliances, while running at maximum efficiency.

The Honda EU2200i is a perfect choice for camping and any other location that quiet power is desired.

Neither the EU2000i nor the EU2200i produces enough power for use with heavy-duty equipment or energy-guzzling appliances. Instead, thanks to their sine wave converter technology, the generators produce much more clean and reliable power best suited for more sensitive equipment such as computers, flat-screen TVs, and smartphones. However, both models are at their best when you’re on the go because their lightweight designs make for easy transport on long trips. While they aren't quite powerful enough to power RV trailers, they can reliably provide steady currents for camping trips, parties, tailgating, and fishing. Additionally, they can be good to have around in the event of a power outage. At peak load, they are more than capable of powering small things like emergency radios or cell phones. And, with the built-in Eco Throttle™ system that automatically matches engine speed to power demand, both models are very fuel-efficient, so it’s possible to charge your more sensitive electronics all night.

Or, if your power needs are a bit more intensive than what one EU2000i can provide, you can just use two. The model has a built-in link feature that allows it to connect to another unit and share the burden. This provides twice the power output, letting the two generators power much larger appliances than they could alone. However, this option is a bit more pricey and might not be for everyone

The Honda EU2200i is a compact, lightweight generator that features advanced inverter technology for a clean stable power which is suitable for sensitive electronic devices and appliances.

Despite its age, the Honda EU2000i remains one of the best portable inverter generators. Even as similar units became more and more sophisticated, years passed before any competitor could match the EU2000i in reliability, fuel efficiency, or power output. So if you’re in the market for a portable generator, you can’t do much better than the one that set the stage for everything that came later.

In terms of power, the EU2000i has an excellent engine in the form of the four-stroke overhead valve Honda GX100. This engine has a running wattage of 1600W and a peak wattage of 2000W. Its fuel-efficient runtime is bolstered by the Honda-patented Eco Throttle™ system, which automatically adjusts fuel consumption according to workload. The EU2000i can run for up to 3.5 hours at peak load and up to 8 hours at 25% load on less than a gallon of gas. That’s perfect for charging phones or camping equipment overnight.

Another key feature that’s most useful in the outdoors is the lack of noise from the engine while it’s in operation. The EU2000i’s casing is built with sound-reducing materials, making it one of the quietest generators on the market. Even at peak load, the super quiet engine remains at a comfortable 60db and falls to 50db at 25% load, making it ideal for precise work. No other company has been able to create an engine that runs as quietly as the EU2000i.

When Will Honda EU2200i Be Available For Sale?

On March 17th 2020 Honda Generators including the Honda EU2200i were recalled due to fuel leaks that could lead to the risk of fire. Other models recalled were the EB2200i, the EU2200i Companion and the EU2200i Camo.

I have been monitoring news around this topic and I have not seen any updates to this situation so far.

However, I know that as of early September 2020, Amazon have been selling the Honda EU2200i.

I will continue to monitor the news and provide updates.

The EU2000i and its sibling model, the EU2200i, were first envisioned and designed in Japan. Today, the designs are sent to the Honda Power Division headquartered in Alpharetta, Georgia, and then to 11 manufacturing plants around the world, the most notable of these being the one located in Swepsonville, North Carolina.

The Honda EU2000i and Honda EU2200i rely on manual recoil for starting. First, make sure that the tank is filled with fuel and that the Eco Throttle™ switch is off. Find the choke level, and make sure it’s closed before switching the engine switch to the “on” position. Then all you have to do is pull the cord until the engine starts.

The startup is a bit easier on the EU2200i because of an added mechanical depression system that significantly reduces the force required to turn over the engine. Gray contact points were also added to help the user through the process.

The EU2000i and the EU2200i each take 0.95L of 10W-30 oil to run. Today’s generators tend to have LCD screens to help the user perform basic diagnostics at a glance, but neither Honda model includes this feature, so it can be difficult to know when maintenance is required. However, each model is equipped with a low oil shutdown, which, as the name suggests, automatically shuts off the engine when oil is about to run out to prevent engine damage.

Just like the 2000i the Honda EU2200i is a reliable portable inverter generator from the renowned Honda brand. It is loaded with lots of advanced features that gives you smooth, clean power for your appliance while running at premium efficiency.

It has lots of amazing reviews and people just love this generator.  It would be my all time pick as number 1, but it is not CARB compliant.  Today, that probably doesn't matter, unless you are in California,  but it may be a problem in the future. The more powerful Honda EU3000iS is CARB compliant if that feature is important to to you.

Amazon and the Amazon logo are trademarks of Amazon.com, Inc, or its affiliates.

Mike Newby
Hi! I'm Mike, and welcome to my website. I created 10powerup because I’m passionate about generators.As an engineer, I use them virtually every day on work sites and, on weekends, I love heading out with the family on camping trips with our trusty RV.I hope the information I provide helps you to choose the right generator for your needs.